French Jews have published a communiqué calling on everyone in France to vote against Marine Le Pen’s National Front in regional elections, together with photograph showing Le Pen’s niece Marion Maréchal-Le Pen giving a wave with her right arm in the air. Maréchal-Le Pen won the first round in the southern PACA region.

The French Jewish umbrella organization CRIF (funded by the Socialist government) on Monday called on French mainstream political forces to unite against the far-right and xenophobic National Front (FN) party, which on Sunday became the largest party in nation-wide regional elections. 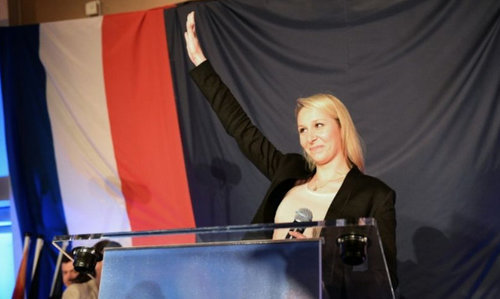 CRIF President Roger Cukierman said in a statement: “These results are very disappointing. The increase of the FN now makes it the strongest party in France, which is a very worrying thing for the future.

“We have already had a lot to worry about ISIS, about the growing anti-Semitism in our cities, and about the far-left’s support for the anti-Zionist BDS movement. And now, we’re confronted with the resurgence of the extreme-right.

“For us Jews, this is a dangerous political environment, even though we can count on the support of the governing parties and the opposition Republicans,” declared Cukierman.

France’s chief rabbi, Haim Korsia, called for a “civic uprising” of voters in the second round “to breathe life into democracy… in these particularly troubled times for the nation”.

The FN result was the strongest electoral showing for any far-right party since World War II. Le Pen’s father, National Front founder Jean-Marie Le Pen, had a history of anti-Semitism, though his daughter has distanced herself and the party from him and his record.

he National Front was ahead in six of the 13 regions in mainland France, including in the northern Nord-Pas-de-Calais-Picardie region where Marine Le Pen stood for president, and the Provence-Alpes-Côte d’Azur region in the south where her niece Marion Maréchal-Le Pen headed the FN list

In a press release, the CRIF pointed out the presence of important Jewish communities in cities such as Marseille, Cannes, Nice and Strasbourg, which could soon fall within FN-run regional administrations.

The second round of the regional elections will be held next Sunday. According to the electoral system, the winning list will automatically be given a ‘premium’ to give it an overall majority.

The Socialist Party on Monday announced that it would withdraw some candidates from the race in order to consolidate the opposition to the National Front.

Source: ‘Do not let the Republic give way in the face of threats’: French Jews urge unity against Le Pen party :: World Jewish Congress